Reasons to be cheerful? Finding out that glazes you have been given actually work!

Last year we were given some raku glazes by a colleague who was retiring. We've never had time to test them to see if they do what they say on the packet - so today we thought we would give them a go!

The glazes came in powdered form under names of Persian crackle, College matt copper, White crackle, Transparent and Turquoise. We needed to try them alongside our own tried and tested glazes to make sure that they melted at the same temperature.

Raku  refers to a type of low-firing process that was inspired by the traditional Japanese way of firing pots to be used in their tea ceramonies. Western-style raku usually involves removing pottery from the kiln while at bright red heat and placing it into containers with combustible materials such as sawdust. Once the materials ignite, the containers are closed, blocking off oxygen supply causing a "reduction" atmosphere. Then the pots are usually dunked in water to stop the process and to cool them down. Copper in the glazes can come out looking like brand new copper pipes. 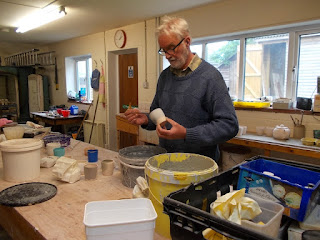 Although the glazes came as a powder, the powder had clogged together in  lumps and had to be pounded, mixed with water, and put through sieves before they could be painted on the pots.


The pots were put into the kiln. Gerry made the kiln out of an old oil drum and lined it with heat proof fibre. It has a hole in the side for a burner, and a spy hole at the top. Through the spy hole you can see if the glaze on the outside of the pots has melted - it goes shiney. The containers have sawdust in them which we use as the combustable material. 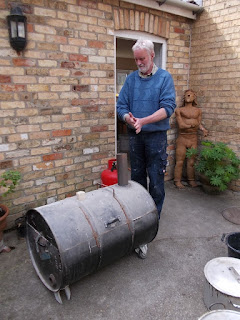 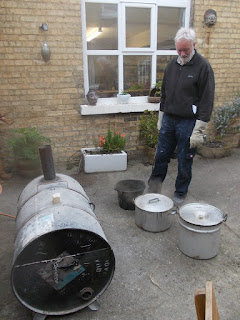 These are the results of the tests.  In the back row from left to right is Turquoise, then the white crackle, our blue/greenglaze, and the transparentglaze.

Bottom row is the Persian crackle, our blue glaze, our white glaze and the copper matt. 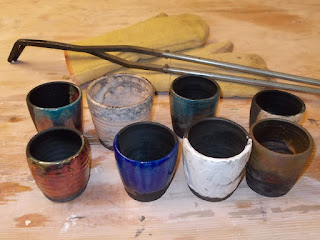 The results were interseting if unexpected. All the glazes melted at the same temperature which was great. None of the glazes crackled though, and both the Turquoise and the Persian crackle must have had a lot of copper in them because they came out the shiney copper colour. The matt college copper had unusual streaks of colour, like oil staining, and the transparent glaze came out pink....

That's the good thing about pottery - things often surprise you in a good way.