Reasons to be cheerful! Celebrating VE anniversary during lockdown.

VE Day celebrations and this is something I was told by my mother that was brought to mind today!
My mother was a teenager during the war, and like other teenagers she used camp coffee to draw a line down the back of her legs to look like she was wearing "nylons". She did manage to acquire a pair of nylons but kept them for best.

The family lived in South Gosforth, a suburb of Newcastle. One night she had gone to the local youth club dance and had been picked up by my grandfather to be walked home. They heard the screeching noise of a doodle bug very close, and then it cut out. That was a warning that the bomb was falling.

My grandfather asked my mother to lie down on the ground behind a wall, but she refused because she would ladder her nylons - so was roughly pushed down. The doodle bug landed at two streets away taking out a couple of houses. Mother cried all the way home at the damage done to her nylons. 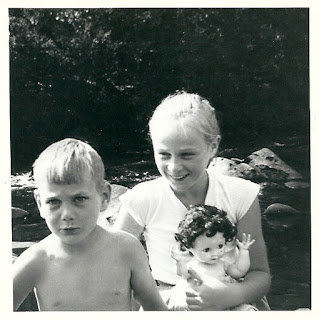 This afternoon we had an afternoon tea - scones and cream with Prosecco. All right - the scones didn't rise much, probably due to the fact that the flour I had used had been knocking around for ages. But the prosecco was good!!!!
The tablecloth was made by my grand father who was taught to embroider after being wounded in the First World War - it was part of his recuperation. It is so beautifiully made with stranded cotton that you cannot tell the reverse side from the front. 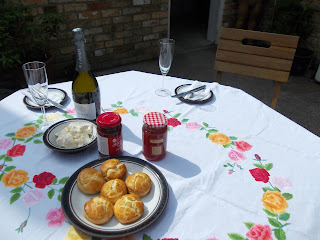 And now we're off to make a circle of friendship around the village green - social distancing rules apply, and we are going to sing "We'll meet again".....

Posted by Fangfoss Pottery at 11:44