A really busy day today - things to do in the pottery and out in the garden, ending the day with a couple of beers!

First thing in the pottery I polished the little birds that we had pit fired yesterday. I particularly like the little orangey brown one - the result of putting some iron oxide in the sawdust.


In the meantime, Gerry tried to burnish the pots he had put slip around yesterday, to try and make them shiney. The plain red one worked out well, but the black and red one smudged with the colours running together. So--- the makers of the La Tene vase couldn't have done it that way. Perhaps they fired the red pot and put the pattern on afterwards - that's what he will try next. 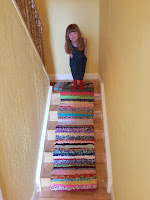 My daughter has been making a "clippy" runner to go up the stairs in her old house and has run out of material. She asked me if I could have a clear out and send her any old clothes we didn't want, so we went through our drawers and I have been able to put a parcel together for her.

The runner is bonded on the back and will be held in place with stair rods.


After dinner we began to pick out the loose grout between the paving slabs in the front garden ready to refill with cement. 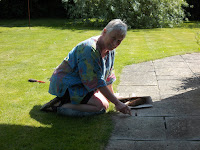 A difficult job in the sun and it was great to end the day sitting out with a couple of beers!

Off to do the Whats app quiz night run by the pub.....
Posted by Fangfoss Pottery at 12:31