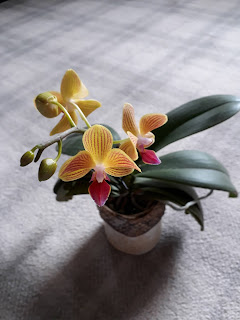 Two years ago I was given an orchid by a craftsworker who was sharing our pottery as part of an Open Studios Event.

The orchid flowered for  three or four months and then the petals fell off. I kept it though.  Some of the leaves withered and died but I still had it on the windowsill.

Then after Christmas I noticed a vertical shoot growing. At first I thought it was one of those misleading roots - they look like stems but aren't.

Gradually it developed buds and now it has flowered. It's quite small and I don't think the flowers are as big - but they are a lovely colour and I am so proud that I managed to keep it alive!

Posted by Fangfoss Pottery at 13:02