Tales from the old school!

The original fireplace in the Infant's Classroom
This is the fireplace that was used in the corner of the smaller classroom. The boiler was in the main classroom and the heat circulated through the large pipes until it reached here. Unfortunately, sometimes it had grown cold by the time it got to this classroom. Former pupils remember the fire always blazing and the teachers desk being quite near to it!

The children had to pay school subs of 1p per week (I don't know how long ago this was, or when the practice stopped) and those that paid were allowed to sit near the fire. Those that forgot had to sit at the back! 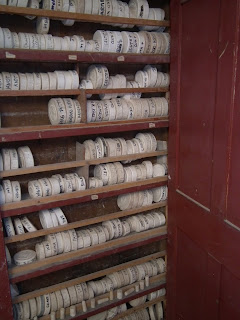 This is the original cupboard that stood next to the back door, leading out to the toilets. It was known as the inkwell cupboard, and it was the job of the ink well monitor to fill up the ink wells every week. The ink well monitor at some particular time was the head teachers daughter, so one of the pupils decided to play a trick on her. He placed the large bottle of ink right on the edge of the shelf so that when the door was opened the ink fell out all over her.

Obviously the  teacher of the class was furious and severly punished the pupil, but decided it was so great an offence that a letter should be sent to the boy's parents, who lived in Bolton at the time. She gave the letter to the boy, who threw it in Fangfoss Beck on the way home. The  teacher, wondering why the pupil's parents hadn't responded, decided to pay them a personal visit. So after school one evening she set off for Bolton on her bike.Unfortunately it was icy, and  she fell off her bike breaking her arm and ending up in hospital. The pupil thought he had got away with it but he hadn't. Not knowing what her son had done, the pupil's mother thought it would be a nice gesture to go and take some flowers to the teacher in hospital - and that was when the truth came out! The pupil was expelled for a while - and according hto him it wasn't the first or last time!

Posted by Fangfoss Pottery at 12:00