We sold two large moon vases at Potfest in Scotland, so Gerry has been making some more to take with us to Potfest in the Pens in Penrith at the end of the month. 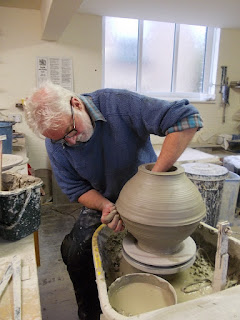 Traditionally made in Korea for ceremonial and decorative use, moon vases are made in two halves then joined together when "leather hard".

In this photo, Gerry is pressing the two halves together and smoothing down the join.

Posted by Fangfoss Pottery at 11:36