After a couple of years of making pottery boots, Gerry heard of a pottery called Scarborough pottery that was closing down and was selling off all its equipment including their moulds. We decided to go over - it was actually in Filey- and have a look. Everything was going up for tender - block and case moulds, working moulds, and other pottery equipment, so we put in a quote, not thinking we would be close and we got the whole lot. It seemed that we were the only ones who bid anything.
That was when we started slip casting in a big way. 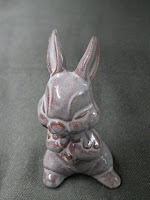 Some of the moulds we bought were from Hornsea pottery originals. In the 1950s and onwards, Hornsea did little vases with rabbits and deers on the side of them. We got them all!

We also got the moulds to make mugs which proved to be very popular. One of the mugs was an elephant where the trunk formed the handle. Another was a crocodile with the tail being the handle. 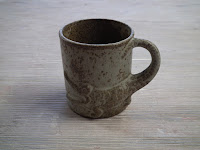 Posted by Fangfoss Pottery at 12:24